One of these days I have positive news about the global smartphone market. Today is not that day. The industry ended another dismal year with a 17% year-on-year decline for the fourth quarter. That number puts full-year shipping numbers 11% below 2021, according to new figures from Canalys, which cites it as “an extremely challenging year for all suppliers.”

It’s one thing after another from the industry. Slowing numbers predate 2020 as the pandemic and its various knock-on effects continued to throw roadblocks. For 2022, the same macroeconomic headwinds that have affected virtually every facet of life have taken their toll on the industry. In particular, quarterly and full-year figures were at their lowest levels in nearly a decade. The company tells TechCrunch, “We have to go back to 2013 to find lower numbers — and then the market situation was very different because the technology was much more up and coming.” 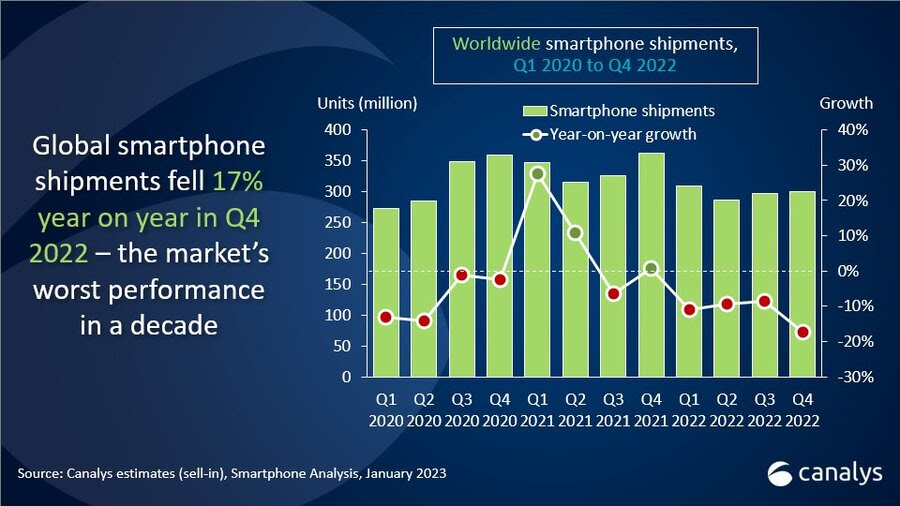 It’s a long shot to say that the industry saw a slight uptick as supply chain restrictions began to ease, but additional external forces reversed those positive trends – and then some. The company also doesn’t expect much recovery for the remainder of 2023, forecasting growth to be “flat to marginal” as economic uncertainty and inflation persist.

Unemployment, rate hikes and other issues are expected to negatively impact “mid-to-upper segment dominated markets,” including North America and parts of Europe. That should be offset to some extent by a shock from China as the world’s largest smartphone market continues its reopening process.

Well, that was fast • TechCrunch