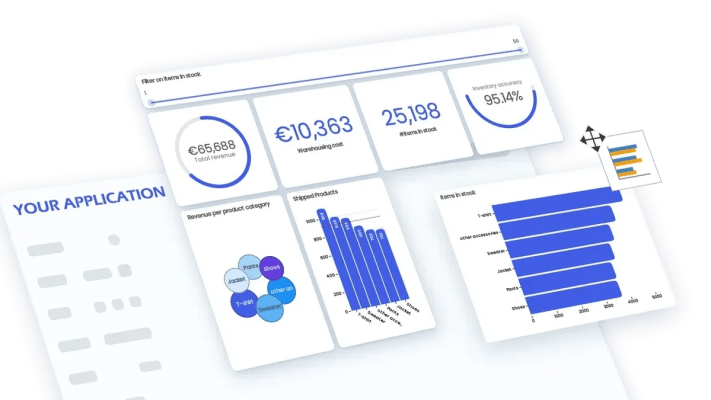 Cumul.iothe company behind a low-code business intelligence (BI) analytics platform for software-as-a-service (SaaS) companies, has raised €10 million ($10.8 million) in a Series A funding round.

Founded in Belgium in 2015, Cumul.io operates in a similar space to established BI incumbents such as Tableau and Looker, but differentiates itself through a focus on specifically bringing embedded analytics to SaaS applications.

Embedded analytics, for the uninitiated, is where companies offer data reporting and visualizations right within their software, rather than having to use a separate, standalone BI application – offering convenience and simplicity to growing businesses that prefer to focus their resources on their core competencies .

“More and more users of SaaS products or software platforms expect insights and data to be made available directly in their core apps, as a native component,” explains Cumul.io CEO and co-founder Karel Callens to TechCrunch. “SaaS companies are looking for solutions that can be rolled out and brought to market quickly, are easy to use, and scale and adapt with minimal effort to keep costs down.”

Cumul.io allows its customers – including venture-backed SaaS scale-ups like Dixa – to integrate white-label analytics and dashboards into their software by connecting virtually any data source, dragging and dropping specific functions to their dashboards, and copy and then paste a snippet of code into their application to serve thousands of end users.

While Cumul.io is certainly similar to Looker and Tableau in terms of the atmosphere it operates in, Callens thinks its closest competitor is actually technical teams that have a general distaste for third-party embedded analytics providers, who choose to sting instead put together their own solution.

“Many product and engineering teams still have the misconception that using an embedded analytics vendor will limit their flexibility compared to building it out themselves,” added Callens. “A lot is still being learned about how powerful and flexible low-code tools can be today.”

So far, Cumul.io has raised about €3.1 million ($3.4 million) in funding, and with its new cash injection, the company said it plans to strengthen the workforce at its Leuven and Genk offices in Belgium , as well as its hub in New York. Indeed, the company said that more than a third of its sales already come from the North American market.

Cumul.io’s Series A round was led by a France-based early-stage VC firm Hello Inov-Dentressanglewith the participation of Axeleo Capital, LRM and SmartFin.

Sony and Honda envision an EV that entertains while driving • TechCrunch

Inside Motional’s strategy to bring robotaxis to market • TechCrunch